It can be argued that the most iconic watches were borne by necessity and practicality and the Jaeger-LeCoultre Reverso is no exception.  Developed by Jaques-David LeCoultre with engineer René-Alfred Chauvot for Polo players who demanded a wrist watch that could withstand the physical nature of the sport.  The ingenious design protected the dial, hands and glass by using pins, grooves and a locking mechanism to slide the watch out of it’s frame and turn around to reveal the reverse metal caseback.

Since LeCoultre patented this design in 1931 there have been many iterations produced but our focus today is on the Reverso Repetition Minutes introduced in the mid 1990’s.

Watches that sound the time have long been a speciality of Jaeger-LeCoultre.  These include repeaters which strike on demand the hours, the quarters and, since the 19th century, the minutes as well. The time is repeated in sound by hammers striking steel gongs when one slides a bolt along the case - a facility originally designed to tell the time in the dark. Jaeger-LeCoultre registered a number of patents in its development of the repeater until technological advances allowed the complex mechanism to be reduced to wrist watch size.

The manufacturers, watchmakers and technicians had to muster all their skills and ingenuity to create a minute-repeater in a rectangular calibre. They developed an entirely new repeating movement. The Calibre 943 comprised of 306 parts, finished and adjusted together by hand. Goldsmiths and designers combined their talents to create the 18-carat pink-gold case with the ribbed bolt to arm and release the repeating mechanism. An aperture in the silver, engine turned dial reveals the spinning governor of gold, blued screws and rubies that keeps the strike as regular as a metronome.

A limited production run of 500 were created in the mid 1990’s priced then at $98,000 AUD which was comparatively less than other Swiss rivals for such a complication. 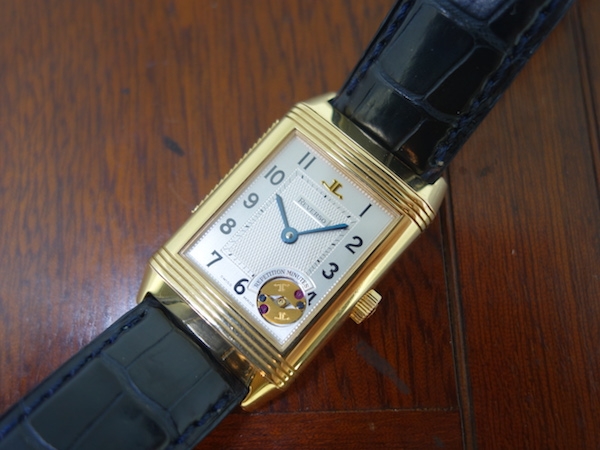 I procured this wrist watch seven years ago from a good customer of our Brisbane store after I traded my Patek Philippe 5056P, a lovely moon phase platinum wrist watch but the allure of a minute repeater complication and the classic art deco style was too much to resist.

This wrist watch sits very comfortably on the wrist and activating the repeater with the bolt is straightforward in operation.  The strikes are tonally pleasant and loud enough to hear in a relatively noisy environment.

Since ownership this watch has been mechanically faultless and accurate in its timekeeping.  This particular example did not come with box or papers but that does not detract from the ownership experience of this great iconic model with a discreet complication within.

Posted in Articles By

You have no items in your shopping cart.